TTW picked as one of The Times’ Books of the Year 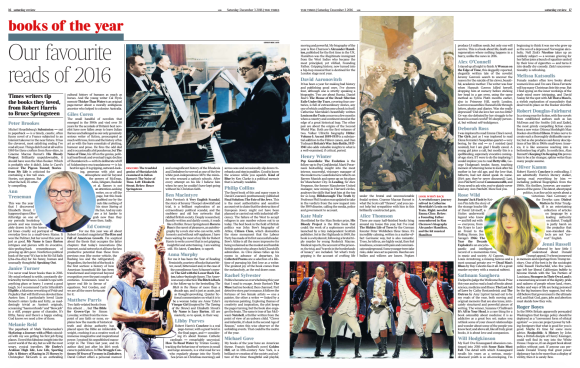 I somehow managed to miss this when it first came out, but a friend has very kindly drawn my attention to Thicker Than Water‘s inclusion among The Times’ Books of the Year 2016.

It was picked by reviewer and columnist Melanie Reid, who also wrote the lovely  review that will feature on the new paperback cover (out February 23rd). I’m delighted and extremely grateful.

Thicker Than Water reviewed in The Times of London

I was delighted to find a lovely review of Thicker Than Water in The Times’ Saturday Review section this weekend – I was especially pleased to find it was written by Melanie Reid, whose Spinal Column in The Times Magazine (about her recovery from a terrible riding accident, which left her tetraplegic) I have often admired for its bravery and emotional acuity.

The resulting book is stunning. Thicker than Water is a thrilling debut, a true story that reads like classy, compelling fiction…

Thicker than Water combines memoir, history, travelogue and lyrical nature writing into a dramatic page-turner. It succeeds above all because of its two striking protagonists: the dishonourable, flawed McMillan, as brave and brutal and morally ambiguous as his century, and Flyn herself. Her ballsiness and likeability, as the narrator and the heroine of the travelogue, made her an irresistible companion

My book is available on pre-order from Waterstones and Amazon.co.uk.

The full review can be found on the Times website here (£) or after the fold. END_OF_DOCUMENT_TOKEN_TO_BE_REPLACED 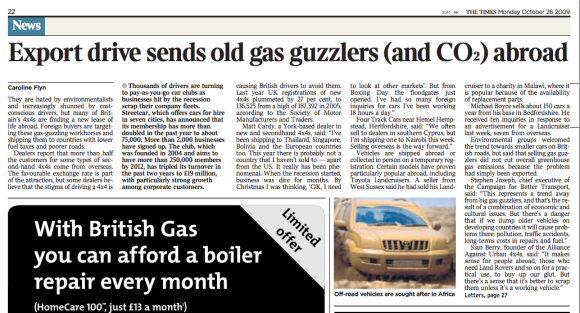 I’ve spent a couple of weeks at The Times, largely as part of a team covering the fallout following Thomas Legg’s report into MPs expenses, but here’s another article I’ve written while I’ve been here, about a new trend in second-hand 4x4s being exported abroad, where it is much cheaper to run them.

I called everyone who had advertised a 4×4 for sale in the previous week’s Autotrader, to find out where the cars had ended up – all were remarkably polite and helpful…

Full text is after the fold.

END_OF_DOCUMENT_TOKEN_TO_BE_REPLACED

I worked on the team at The Times covering the Legg report into the MPs’ expenses scandal.

I brought in the top line of this particular story, about the Conservative MP Eleanor Laing who has decided to make a five-figure repayment despite being cleared in the report.

A Conservative frontbencher sought yesterday to salvage her political career by handing back £25,000 of expenses, even though she has been given a clean bill of health by Sir Thomas Legg’s independent audit.

Eleanor Laing’s decision to make a voluntary repayment reflects the acute anxiety felt by a number of senior MPs as they await the final verdict from the Legg report in December — and from the voters next year.

The Tory justice spokeswoman was heavily criticised this summer for avoiding a £180,000 capital gains tax bill on the sale of two Westminster flats in 2008. She told the tax authorities that they were her principal residence, despite designating them as her second home for expenses purposes.

Sir Thomas’s ruling this week that she does not have to return any expenses has not spared Mrs Laing the ordeal of a special meeting of her Epping Forest Conservative Association on October 26 which will decide whether to deselect her as the party’s candidate for the coming election.

She said last night: “I feel honourbound to pay this money, which I have done. As my payment doesn’t represent any claim or overpayment, I have asked Sir Thomas to consider sending it to a charity for homeless children, such as Barnardo’s.”

Although her repayment is the biggest to have emerged so far this week, other MPs are rumoured to be facing demands to return even larger sums.

Many more have been told to submit detailed information to prove that claims worth tens of thousands of pounds for mortgage interest were within the rules.

Martin Bell, the former independent MP, said yesterday that he had held meetings with people who are consid-erinstanding against Labour’s Keith Vaz and the Tory Alan Duncan — both of whom are widely perceived as having made excessive claims.

David Curry, an independently minded Conservative MP, emerged as the likely new chairman of the Standards and Privileges Committee, which will play a key role in deciding the fate of those deemed to have cheated on their claims.

Mr Curry, who is expected to replace Sir George Young in the role next week, survived relatively well in the expenses onslaught over the summer. He claimed about £9,000 — less than half of the maximum allowed — for each of the past four years. In Westminster, however, MPs continued to voice anger over Sir Thomas’s letters and, in particular, his decision to apply caps retrospectively to some categories but not others.

John Bercow, the Speaker, denied that he had tried to persuade Sir Thomas to abandon the caps on cleaning and gardening claims. Sir Thomas, who has come under heavy attack this week for his handling of the audit, was reported to have insisted that retrospective limits were necesssary because his own reputation for propriety was at stake.

Nick Clegg, the Liberal Democrat leader, drew fire in the Commons for suggesting that Sir Thomas should extend his inquiries into those who “flipped” homes or avoided capital gains tax to pay up.

Half a dozen Cabinet ministers, including Alistair Darling, are known to have been asked to provide further information about their claims.

Three others — Liam Fox, Andrew Mitchell and David Mundell — are said to be in “ongoing discussions” with “detailed areas to be resolved”.

According to an analysis by The Times, the Shadow Cabinet has claimed almost half a million pounds more than the Cabinet in additional costs allowance (ACA) over the past four years.

However, the vast bulk of ACA claims relate to mortgage interest payments on second homes. Many MPs are bitter at the way that those who used taxpayers’ money to subsidise their ownership of a valuable asset have been seen as “squeaky-clean” — while others claiming for daily expenditure have been publicly shamed or forced to hand back money.

Stephen Williams, the Liberal Democrat MP for Bristol West, accused Mr Cameron of claiming near the maximum allowed on mortgage interest “to build up a property portfolio”, adding: “I do think there’s an unfairness in that.”