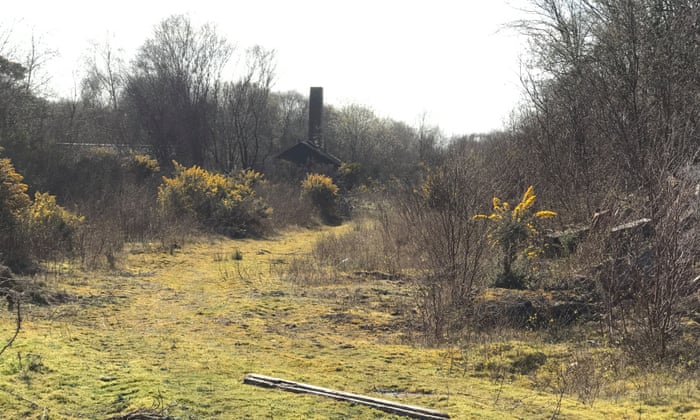 Another short scenic snippet for the Guardian’s lovely Country Diary, which I love contributing to. Here’s a small scene from the Ardeer peninsula in Ayrshire – a former explosives works turned wild.

I visited Ardeer with local campaigners seeking to keep it wild; plans to develop the region were released several years ago, but are facing much resistance from environmentalists. Due to an legal quirk dating from its use as a factory, no planning permission is required to build on the site – and having it declared an SSSI is currently impossible for the same reason. But maybe this can change. (If you’d like more information on that campaign, please look out for my next Scottish Field column.)

Full text on the Guardian site here, or after the fold:

A red light had been spinning as we crept along the fenceline, but I hadn’t understood it was a warning until the blast went off. I jumped and screamed. We were exploring the ruins of an old explosives factory, and for a moment I thought we were done for.

Once a vast complex of sand dunes and salt marsh, the Ardeer peninsula near Irvine became a cradle of industry in the 19th century, when Alfred Nobel’s dynamite works were constructed on this remote stretch of coastline. At its height, it supported 13,000 jobs, but those days are now long gone.

The 1,700-acre peninsula is still home to sand quarries and a few minor pyrotechnic testing sites – as I’d just discovered. But the site is largely abandoned. Tumbledown huts lie scattered between the sand hills, each protected behind blast walls now overgrown with heather. Inside, dappled light swept the dusty floors. Old paint drifted in corners as fallen leaves. “DANGER,” warned a faded sign on a fallen door. “Explosive atmosphere.”

It might seem an unlikely spot to go looking for wildlife, but Ardeer has become a hub of biodiversity. Iain Hamlin, a local conservationist, led me into what was once a car park, now pillowy with moss and lichen, and increasingly crowded with sea buckthorn and goat willow tasselled by catkins. Peacock butterflies twirled over the brownfield heathland.

This sunny, semi-open expanse is an example of valuable “open mosaic” habitat, which is particularly beloved by invertebrate life. More than 260 species of beetle have been recorded there in recent years, plus a large number of wasps and solitary bees, including the rare northern colletes. We peered down into the tunnels of the minotaur beetle (Typhaeus typhoeus), a horned, gloss-black beast that feeds on rabbit droppings, rolling balls of dung into its warren-like pantries.

We walked on – past cooling ponds, strewn with rusted pipes and busy with teals and moorhens, and through forest clearings where Narnian lampposts stood awkwardly. Jays were nesting nearby. Over the hill came smoke and shouting from teens setting gorse fires. No pristine landscape, this, but it attracts wildlife in all its forms.