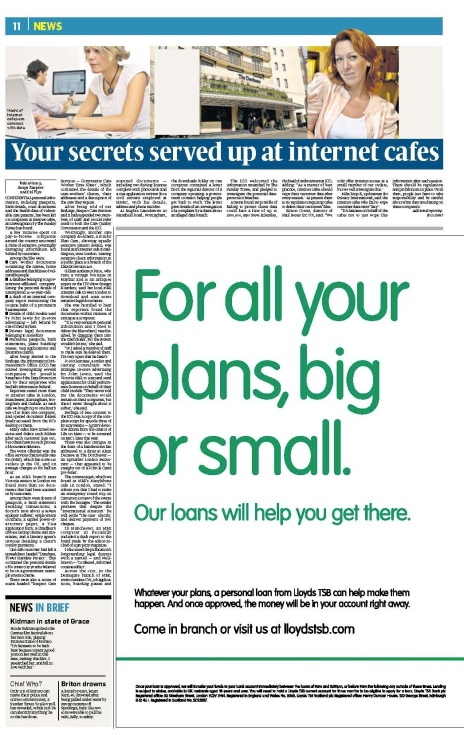 Last week I worked on a Sunday Times investigation into data breaches at internet cafes. Three reporters checked internet cafe computers around the country to see whether confidential data had been left in the computer memories.

And how. Simply by checking the desktop, documents and ‘my pictures’ folder, we stumbled across a treasure trove of private information: scanned copies of passports, visa applications, birth certificates, legal documents; a report from the editor-in-chief of a well-known property magazine detailing its legal struggles with a “confessed reformed cocaine addict”; a fax to a resident at the Dorchester referring to ‘the hostage situation in Cameroon’ and several databases of names, addresses and private details of vulnerable individuals left by care workers or civil servants.

The chain Mailbox Etc were the worst offenders, with no log-in/out process and irregular wiping of computer memories. I found documents dating back to mid 2012 on some machines. Many small independent cafes were among the best, such as the L2K Internet Gaming Centre in Manchester, which restricted users’ access to the computer memory.

The Information Commissioner announced that it would be investigating a number of bodies for a breach of confidentiality as a result of our investigation.

Full text is available on the Sunday Times website here, or after the fold. END_OF_DOCUMENT_TOKEN_TO_BE_REPLACED

An article I worked on with Peter Newlands and Jon Ungoed-Thomas made the front page of the Sunday Times this weekend.

Freedom of information requests revealed more than half of police forces that responded to use a ‘screening out’ process, in which crimes are not investigated because police feel they are unlikely to be solved.

Among the victims affected was Marc Cutler, a public relations executive from north London, who had his Charge Plug bike stolen from railings near a flower market last year.

He said: “I spoke to the police, but they said there was not a lot they could do. They’d give me a crime report number, but they were not hopeful I’d get it back.

Cutler tracked down the stolen bike himself by scanning for advertisements on websites. He contacted the seller, a Russian man, and took two friends for the rendezovous.

At the meeting, Cutler clutched his stolen bike as his friends phone the police. Cutler said: “When the police got there, they checked the serial number and told the man he could leave the bike with me, or be arrested – he finally left. It’s a shame that they don’t take crimes like this seriously.”

Philippa Brady, an events manager who lives in London, had her bank card, camera and cash stolen during a night out at a cinema. There was CCTV footage that could have been examined, but police said a detailed investigation was not appropriate. She says she was told by an officer “There wasn’t a thing they could do.”

Full text is available on the Sunday Times website here, or after the fold.

Two websites helped me speak to a number of affected cyclists whose stolen bikes were not investigated – www.stolen-bikes.co.uk and www.londoncyclist.co.uk.