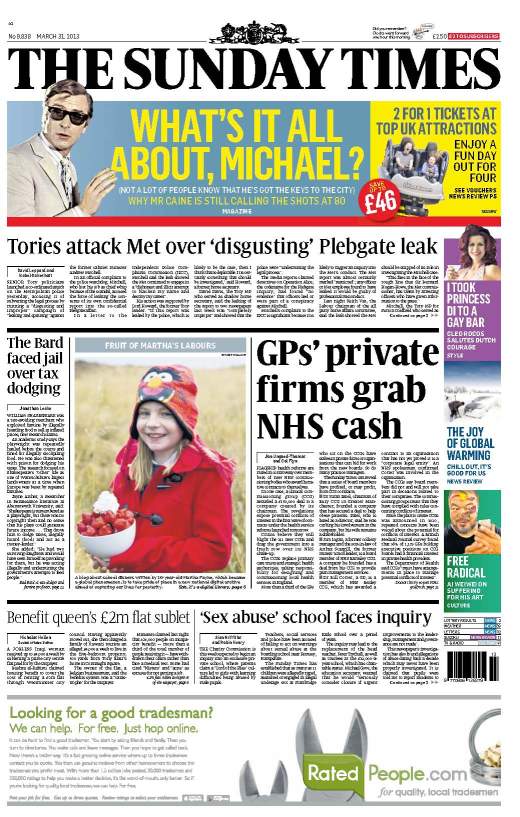 The NHS will undergo one of the most radical shake-ups in its history this week, devised to give GPs new powers on the front line and liberate the NHS from political control.

Under the controversial 2012 Health and Social Care Bill, clinical commissioning groups will control a £65bn annual budget — more than two-thirds of the total NHS budget.

The reforms are intended to open up the NHS market to greater competition by making it possible for companies, charities and other health providers to bid for work.

Every GP practice in England is affiliated to one of the 211 commissioning groups, whose boards are made up of GPs, at least one nurse, a hospital doctor and two or more lay members.

I worked on this investigation at the Sunday Times which revealed a number of board members on the new commissioning boards to already be benefitting from the changes – in one case, a clinical commissioning group has awarded a £150,000 deal to a company created by its chairman.

It was the front page ‘splash’ on Sunday – the day before the clinical commissioning groups went live.

Full text can be found here on the website, or after the fold.

FLAGSHIP health reforms are mired in controversy over members of new NHS commissioning bodies who award lucrative contracts to themselves. In one case, a clinical commissioning group (CCG) awarded a £150,000 deal to a company created by its chairman. The revelations expose potential conflicts of interest in the first wave of contracts under the health service reforms launched tomorrow.

Critics believe they will blight the 211 new CCGs and drag the government into a fresh row over its NHS shake-up.

More than a third of the GPs who sit on the CCGs have stakes in private firms or organisations that can bid for work from the new boards. So do many practice managers.

The Sunday Times can reveal that a series of board members have profited, or may profit, from CCG contracts.

* Dr Kiran Patel, chairman of Bury CCG in Greater Manchester, founded a company that has secured a deal to help obese patients. Patel, who is listed as a director, said he was curbing his involvement in the company, but his wife remains a shareholder.

* Jim Logan, a former colliery manager and the son-in-law of Arthur Scargill, the former miners’ union leader, is a board member of NHS Barnsley CCG. A company he founded has a deal from his CCG to provide pain management services.

* Dr Bill Cotter, a GP, is a member of NHS Bexley CCG, which has awarded a contract to an organisation that has not yet proved it is a “corporate legal entity”. An NHS spokesman confirmed Cotter was involved in the organisation.

The CCGs say board members did not and will not take part in decisions related to their companies. The commissioning groups insist that they have complied with rules concerning conflicts of interest. Since the plan to create CCGs was announced in 2010, repeated concerns have been voiced about the potential for conflicts of interest. A British Medical Journal survey found that 36% of 1,179 GPs holding executive positions on CCG boards had a financial interest in private health providers. 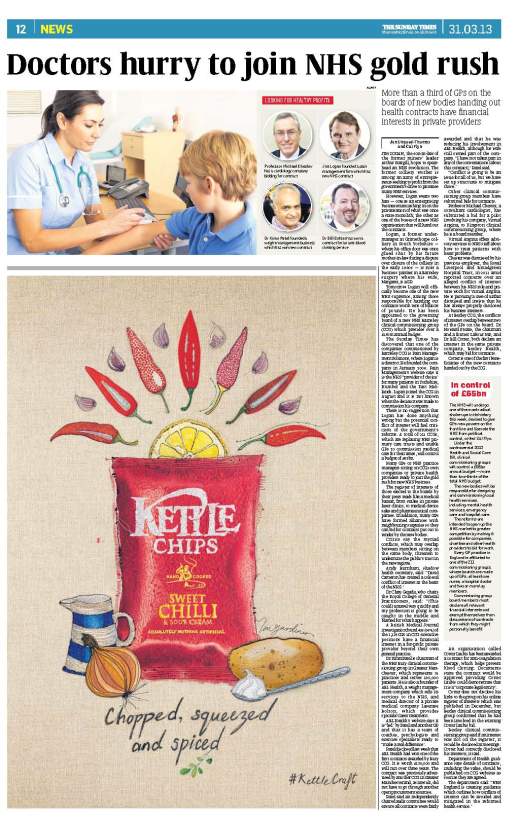 More than a third of GPs on the boards of new bodies handing out health contracts have financial interests in private providers
[inside read: p.12]
Jon Ungoed-Thomas and Cal Flyn

JIM LOGAN, the son-in-law of the former miners’ leader Arthur Scargill, hopes to spearhead an NHS revolution. The former colliery worker is among an army of entrepreneurs seeking to profit from the government’s drive to privatise many NHS services.

However, Logan wears two hats — one as an enterprising businessman cashing in on the privatisation of what was once a state monolith; the other as one of the bosses of a new NHS organisation that will hand out the contracts.

Logan, a former undermanager at Grimethorpe colliery in South Yorkshire — where his office door was once glued shut by his future mother-in-law during a dispute over closure of the colliery in the early 1990s — is now a business partner in a Barnsley surgery where his wife, Margaret, is a GP.

Tomorrow Logan will officially become one of the new NHS supremos, among those responsible for handing out contracts worth tens of billions of pounds. He has been appointed to the governing board of a new NHS Barnsley clinical commissioning group (CCG) which presides over a £350m annual budget.

The Sunday Times has discovered that one of the companies commissioned by Barnsley CCG is Pain Management Solutions, where Logan is a director. He founded the company in January 2006. Pain Management’s website says it is the NHS “provider of choice” for many patients in Yorkshire, Humber and the East Midlands.

Logan joined the CCG in August and it is not known when the decision was made to commission his company.

There is no suggestion that Logan has done anything wrong but the potential conflict of interest will fuel criticism of the government’s reforms. A total of 211 CCGs, which are replacing NHS primary care trusts and enable GPs to commission medical care for their areas, will control a budget of £65bn.

Many GPs or NHS practice managers sitting on CCGs own companies or private health providers ready to join the gold rush for new NHS business.

The register of interests of those elected to the boards by their peers reads like a medical bazaar, from stakes in private laser clinics, to medical device sales and pharmaceutical companies.

In addition, many GPs have formed alliances with neighbouring surgeries so they can bid for contracts put out to tender by the new bodies.

Critics say the myriad conflicts, which may overlap between members sitting on the same body, threaten to undermine the public’s trust in the new regime.

Andy Burnham, shadow health secretary, said: “David Cameron has created a colossal conflict of interest at the heart of the NHS.”

Dr Clare Gerada, who chairs the Royal College of General Practitioners, said: “[This could] unravel very quickly and my profession is going to be caught in the middle and blamed for what happens.”

A British Medical Journal investigation found 426 (36%) of the 1,179 GPs in CCG executive positions have a financial interest in a for-profit private provider beyond their own general practice.

Dr Kiran Patel is chairman of the NHS Bury clinical commissioning group in Greater Manchester, which represents 33 practices and serves 190,000 patients. He is also a founder of ABL Health, a weight management company which sells its services to the NHS, and medical director of a private medical company Laserase Bolton, which provides specialist laser treatment.

ABL Health’s website says it is “led” by Patel and another GP and that it has a team of coaches, psychologists and exercise specialists ready to “make a real difference”.

Patel disclosed last week that ABL Health had won one of the first contracts awarded by Bury CCG. It is worth £150,000 and will run over three years. The contract was previously advertised by another CCG in Greater Manchester and, as a result, did not have to go through another open procurement exercise.

Patel said an independently chaired audit committee would ensure all contracts were fairly awarded and that he was reducing his involvement in ABL Health, although his wife still owned part of the company.

“I have not taken part in any of the conversations [about this contract],” Patel said.

“Conflict is going to be an issue for all of us, but we have set up structures to mitigate those.”

Other clinical commissioning group members have submitted bids for contracts.

Professor Michael Chester, a consultant cardiologist, has submitted a bid for a pilot involving his company, Virtual Angina, to Kingston clinical commissioning group, where he is a board member.

Virtual Angina offers advisory services to NHS staff about how to treat patients with heart problems.

Chester was dismissed by his previous employer, the Royal Liverpool and Broadgreen Hospital Trust, in 2011 amid reported concerns over an alleged conflict of interest between his NHS role and private work for Virtual Angina. He is pursuing a case of unfair dismissal and insists that he has always properly disclosed his business interests.

At Bexley CCG, the conflicts of interest overlap between two of the GPs on the board. Dr Howard Stoate, the chairman and a former Labour MP, and Dr Bill Cotter, both declare an interest in the same private company, Bexley Health, which may bid for contracts.

Cotter is one of the first beneficiaries of the new contracts handed out by the CCG.

An organisation called Cotter Laubis has been awarded a contract for anti-coagulation therapy, which helps prevent blood clotting. Documents state the contract would be approved providing Cotter Laubis could demonstrate that it is a “corporate legal entity”.

Cotter does not disclose his links to the group on his online register of interests which was published in December, but Bexley clinical commissioning group confirmed that he had been involved in the winning Cotter Laubis bid.

Bexley clinical commissioning group said if an interest was not on the register, it would be disclosed at meetings. Cotter had correctly disclosed his interests, it said.

Department of Health guidance says details of contracts, including the value, should be published on CCG websites as soon as they are agreed.

The department said: “NHS England is creating guidance which outlines how conflicts of interest can be avoided and mitigated in the reformed health service.”