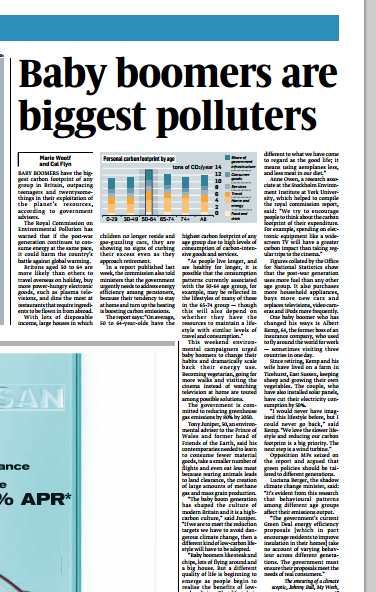 Oddly enough, this article has probably prompted the largest number of letters out of all the articles I’ve written. Most of them started with “Our generation is fed up with being blamed for everything…”

Full text is on the Sunday Times website, here, or after the fold.

All consuming baby boomers are the country’s biggest polluters

With more disposable cash to spend on luxury items like plasma TVs and gas-guzzling cars, are 50 to 64-year-olds costing the earth?

Baby boomers have the biggest carbon footprint of any group in Britain, outpacing teenagers and twentysomethings in their exploitation of the planet’s resources, according to government advisers.

The Royal Commission on Environmental Pollution has warned that if the post-war generation continues to consume energy at the same pace, it could harm the country’s battle against global warming.

Britons aged 50 to 64 are more likely than others to travel overseas on holiday, buy more power-hungry electronic goods, such as plasma televisions, and dine the most at restaurants that require ingredients to be flown in from abroad.

With lots of disposable income, large houses in which children no longer reside and gas-guzzling cars, they are showing no signs of curbing their excess even as they approach retirement.

In a report published last week, the commission also told ministers that the government urgently needs to address energy efficiency among pensioners, because their tendency to stay at home and turn up the heating is boosting carbon emissions.

The report says: “On average, 50 to 64-year-olds have the highest carbon footprint of any age group due to high levels of consumption of carbon-intensive goods and services.

“As people live longer, and are healthy for longer, it is possible that the consumption patterns currently associated with the 50-64 age group, for example, may be reflected in the lifestyles of many of those in the 65-74 group — though this will also depend on whether they have the resources to maintain a lifestyle with similar levels of travel and consumption.”

This weekend environmental campaigners urged baby boomers to change their habits and dramatically scale back their energy use. Becoming vegetarian, going for more walks and visiting the cinema instead of watching television at home are touted among possible solutions.

The government is committed to reducing greenhouse gas emissions by 80% by 2050.

Tony Juniper, 50, an environmental adviser to the Prince of Wales and former head of Friends of the Earth, said his contemporaries needed to learn to consume fewer material goods, take a smaller number of flights and even eat less meat because rearing animals leads to land clearance, the creation of large amounts of methane gas and mass grain production.

“The baby boom generation has shaped the culture of modern Britain and it is a high-carbon culture,” said Juniper. “If we are to meet the reduction targets we have to avoid dangerous climate change, then a different kind of low-carbon lifestyle will have to be adopted.

“Baby boomers like steak and chips, lots of flying around and a big house. But a different quality of life is beginning to emerge as people begin to realise the benefits of low-carbon living. That lifestyle is different to what we have come to regard as the good life; it means using aeroplanes less, and less meat in our diet.”

Anne Owen, a research associate at the Stockholm Environment Institute at York University, which helped to compile the royal commission report, said: “We try to encourage people to think about the carbon footprint of their expenditure. For example, spending on electronic equipment like a wide-screen TV will have a greater carbon impact than taking regular trips to the cinema.”

One baby boomer who has changed his ways is Albert Kemp, 64, the former boss of an insurance company, who used to fly around the world for work — sometimes visiting three countries in one day.

Since retiring, Kemp and his wife have lived on a farm in Ticehurst, East Sussex, keeping sheep and growing their own vegetables. The couple, who have also installed solar panels, have cut their electricity consumption by 50%.

“I would never have imagined this lifestyle before, but I could never go back,” said Kemp. “We love the slower lifestyle and reducing our carbon footprint is a big priority. The next step is a wind turbine.”

Opposition MPs seized on the report and argued that green policies should be tailored to different generations.

“The government’s current Green Deal energy efficiency proposals [which in part encourage residents to improve insulation in their homes] take no account of varying behaviour across different generations. The government must ensure their proposals meet the needs of real consumers.”