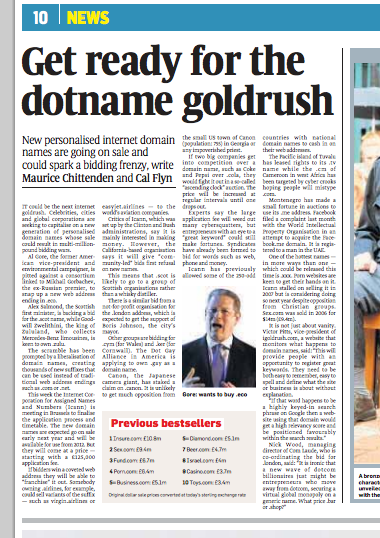 My first article for the Sunday Times. ‘Guardian of the internet’ Icann decides to allow websites to replace the .com with anything they want… providing they have at least £125,000 to set up a registry.

The article is here, or find the text below.

On your marks for dotname goldrush

It could be the next internet goldrush. Celebrities, cities and global corporations are seeking to capitalise on a new generation of personalised domain names whose sale could result in multi-million-pound bidding wars.

Al Gore, the former American vice-president and environmental campaigner, is pitted against a consortium linked to Mikhail Gorbachev, the ex-Russian premier, to snap up a new web address ending in .eco.

Alex Salmond, the Scottish first minister, is backing a bid for the .scot name, while Goodwill Zwelithini, the king of Zululand, who collects Mercedes-Benz limousines, is keen to own .zulu.

The scramble has been prompted by a liberalisation of domain names, creating thousands of new suffixes that can be used instead of traditional web address endings such as .com or .net.

This week the Internet Corporation for Assigned Names and Numbers (Icann) is meeting in Brussels to finalise the application process and timetable. The new domain names are expected go on sale early next year and will be available for use from 2012. But they will come at a price — starting with a £125,000 application fee.

If bidders win a coveted web address they will be able to “franchise” it out. Somebody owning .airlines, for example, could sell variants of the suffix — such as virgin.airlines or easyjet.airlines — to the world’s aviation companies.

Critics of Icann, which was set up by the Clinton and Bush administrations, say it is mainly interested in making money. However, the California-based organisation says it will give “community-led” bids first refusal on new names.

This means that .scot is likely to go to a group of Scottish organisations rather than a whisky distiller.

There is a similar bid from a not-for-profit organisation for the .london address, which is expected to get the support of Boris Johnson, the city’s mayor.

Other groups are bidding for .cym (for Wales) and .ker (for Cornwall). The Dot Gay Alliance in America is applying to own .gay as a domain name.

Canon, the Japanese camera giant, has staked a claim on .canon. It is unlikely to get much opposition from the small US town of Canon (population: 755) in Georgia or any impoverished priest.

If two big companies get into competition over a domain name, such as Coke and Pepsi over .cola, they would fight it out in a so-called “ascending clock” auction. The price will be increased at regular intervals until one drops out.

Experts say the large application fee will weed out many cybersquatters, but entrepreneurs with an eye to a “great keyword” could still make fortunes. Syndicates have already been formed to bid for words such as web, phone and money.

Icann has previously allowed some of the 250-odd countries with national domain names to cash in on their web addresses.

The Pacific island of Tuvalu has leased rights to its .tv name while the .cm of Cameroon in west Africa has been targeted by cyber crooks hoping people will mistype .com.

Montenegro has made a small fortune in auctions to use its .me address. Facebook filed a complaint last month with the World Intellectual Property Organisation in an attempt to acquire the Facebook.me domain. It is registered to a man in the UAE.

It is not just about vanity. Victor Pitts, vice-president of igoldrush.com, a website that monitors what happens to domain names, said: “This will provide people with an opportunity to register great keywords. They need to be both easy to remember, easy to spell and define what the site or business is about without explanation.

“If that word happens to be a highly keyed-in search phrase on Google then a website using that domain would get a high relevancy score and be positioned favourably within the search results.”

Nick Wood, managing director of Com Laude, who is co-ordinating the bid for .london, said: “It is ironic that a new wave of dotcom billionaires just might be entrepreneurs who move away from dotcom, securing a virtual global monopoly on a generic name. What price .bar or .shop?”